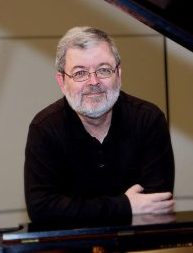 Dr. Doug McConnell is the director of the Chancel Choir at Trinity UCC.  He has served on staff as a church musician for congregations in Ohio, Indiana, and Mississippi.

Doug is also a Professor of Composition/Theory for the School of Music and Theater at Heidelberg University in Tiffin.  He has enjoyed an active career as a composer, teacher, musician, and administrator.  His compositions have been performed throughout the U.S. and internationally, including Canada, England, Germany, Sweden, Finland, Estonia, the Czech Republic, and Russia.

Doug has composed for a variety of performance mediums, but he especially enjoys writing for voices; his work in this area includes a variety of works for choirs including several compositions premiered at Trinity UCC. ,He has also written a number of organ compositions for his wife, Joan. ,Many of these had their first performances at Trinity as well.

Doug and Joan have lived and worked in Tiffin since 2000; they have two adult daughters, Rachel and Susan.  When not working as a musician, Doug enjoys reading, baseball and movies.  He also leads a monthly film discussion series at Trinity UCC, in addition to teaching film studies courses at Heidelberg.