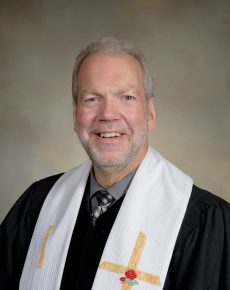 Rev. David A. Voll, who began serving Trinity UCC as Interim Pastor on December 1, 2019, was born and raised in the Chicago area, where his father was a UCC pastor.  He attended UCC-related Lakeland (College) University in Sheboygan, WI to major in music, but eventually switched to a religion major.  During those years he married his wife, Janise, whom he met at a UCC-related church camp during high school.

Pastor Dave and Janise have two adult sons and five grandchildren.  Their older son lives in Archbold, OH near his three children; their younger son, his wife, and their two children live in Mt. Blanchard, OH.